POET JASON MCCALL, THE ELECTRONIC VERSION. (HE DOESN'T WANT YOU TO LEAVE THIS SITE WITHOUT KNOWING HE IS A TWO-TIME SPELLING BEE CHAMPION.)

It Was Written: Poetry Inspired By Hip-Hop 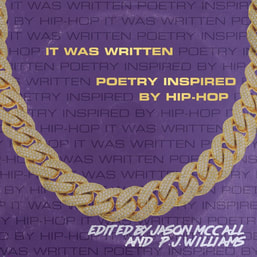 Minor Arcana Press, 2017
Borrowing its name from the 1996 album by Nas, It Was Written: Poetry Inspired by Hip-Hop is the latest book from indie publishers Minor Arcana Press. Jason McCall and P.J. Williams have brought together over 50 poets for a cypher—and a conversation—with hip-hop and literature.

The poems and poets in this book are influenced by hip-hop not only as a genre of music but also as a force of life. Contributing poet Michael Mlekoday says, "Hip-hop isn’t a just a genre I appreciate; it’s a culture that has actively contributed to my sense of self—a way of seeing the world." It Was Written shows how modern poets have engaged with one of the most powerful cultural forces of our time.

And it's not just a book of poetry; It Was Written is a conversation. The poets have also contributed over 30 writing prompts in the back of the book to encourage readers to pick up their own pen.

Order It Was Written
Proudly powered by Weebly